Those fortunate to have central air conditioning in their home are the lucky ones when summer weather hits – lucky, at least until their summer utility bills show up. A portable room air conditioner unit is often seen as the “next best choice” – until a family finds itself shoulder to shoulder, trying to eat dinner, while crammed into the bedroom where the wall mounted air conditioner unit is located.

Central air is expensive to install and operate. Wall or window units (non-portable units) can also cost big money when buying a separate air conditioner for every room of the house.

The “real” solution for many families is a portable ac unit, which can be wheeled from room to room as needed.

Portable ac units may be best suited to those who live in apartments without A/C (or with A/C that doesn’t work properly), since landlords often don’t allow the installation of window air conditioners, or have rules and regulations which make it difficult to put in your own machine.

But they’re also a great choice when normally-temperate climates don’t justify the expense of central air, or for workers whose offices get humid and toasty-hot in July and August. Some families even take a portable air conditioner with them on summer camping trips.

When choosing one of these portable A/C units, the first consideration is naturally its cooling power (which is measured in BTUs); after all, if a machine isn’t powerful enough to cool the rooms where it will be used you’re throwing money away – and if the machine is too powerful it’s simply overkill. As a guideline figure, you’ll need 5,000 BTUs for a smaller bedroom, while you may need 15,000 BTUs for a large living room.

But it’s also crucial to look at a unit’s airflow (measured in cfm, or cubic feet per minute) because that indicates how much cool air the portable air conditioner can circulate through a room.

Other considerations which make a big difference are the amount of noise the air conditioners make, their energy efficiency (which will be reflected on your electric bill), how easy they are to move around, the number of operating speeds, and whether they also have a dehumidifying mode. More expensive units may also have bells and whistles like sleep modes, remote controls, and programmable timers.

Groom+Style have looked at all of these factors in order to compile our list best portable ac unit top 5 list.

We will get to them right after one caution: the rooms where you use a portable air conditioner unit must have at least one window or door. Even though the machine is portable, it still pumps out hot air that has to be vented to the outside. These air conditioners come with an exhaust hose and an easy-to-install window vent for that purpose so you don’t have to worry about how to do it; just don’t buy a portable air conditioner planning to use it in your basement apartment with no windows.

We’re starting with the unit that provides the best balance of power and price. This Honeywell portable air conditioner is less expensive than most of the models on our list but does a very good job of cooling off medium-to-large sized rooms (up to about 15’ x 20’ or 20’ x 20’), thanks to its 10,000 BTU power.

You’ll see portable A/C units on our list with higher BTUs and airflow, at higher prices, but the majority of people simply don’t need that much cooling for the rooms in their house.

One of the best features of the MN10CESBB – other than its ability to cool off a room – is that it does a very good job at dehumidification, removing nearly 70 pints of water from a room per day in normal mode, and up to 85 when the dedicated dehumidification setting is used.

Even better (for those of us who are lazy), like most top models the Honeywell has an auto-evaporation system, so there are no drip pans that will overflow when you forget to empty them. The unit has a three-speed fan in A/C mode, and can also be run in fan-only mode

Like all of the portable air conditioners we looked at, the MB10CESBB is heavier than you’d hope for when buying an appliance labeled “portable.” At about 63 pounds, though, it’s right around average for one of these units and it moves well on caster wheels. Its noise level of 50 dBA is excellent as well, not whisper-quiet but definitely not overwhelming.

The Honeywell has a good energy-efficiency rating, the filter is removable and easy to clean, it has a digital LCD display and a remote control, and there’s an automatic shut-off timer. What it doesn’t have is a sleep mode (which adjusts the temperature at night) or auto-restart, but those are minor issues.

More notable is that its vent hose is about a foot shorter than the competition – which could be an inconvenience for some, but to the team at Groom+Style it wasn’t anything that detracted from the performance of the MB10CESBB. It tops our list, in this review, of the top 5 best portable air conditioners.

(One other note: if you need more power, Honeywell offers higher-priced but terrific 12,000 and 14,000 BTU models, and if you want a combined portable air conditioner and heater, the Honeywell MM14CHCS combines a 14,000 BTU A/C unit with an efficient heater).

We almost bumped this Haier model to the top of the list since it provides a little more power (12,000 vs 10,000 BTU) than the Honeywell at a price that’s only slightly higher. The reason the HPC12XCR comes in second, though, is that it’s noisier (63 dBA vs 50 dBA). Otherwise, it compares favorably to our #1 choice.

That’s because the specs and details of the Haier and the Honeywell are almost identical, except that the former can cool a slightly larger area and the latter is a few pounds heavier.

The HPC12XCR rolls easily on caster wheels, it has a dehumidification mode and removes a little more water from the air because it’s a larger unit, it has a three-speed fan and electronic controls with a full-function remote, and it’s an auto-evaporate portable air conditioner with an easy-to-remove mesh filter.

It’s one of the lower-scoring units in terms of energy-efficiency, however.

Stop us if you’ve heard this before: the Whynter could make a good case for being #1 in our rankings, too. In this case, the Eco-Friendly comes in a bit lower because it’s a little noisier than the Honeywell, doesn’t cool quite as well as the Haier on a BTU-for-BTU basis, and comes with a shorter warranty.

However, it’s the most energy-efficient portable air conditioner on our list and it is only a touch noisier than the Honeywell (you probably wouldn’t notice the difference). Consider our first three reviews as 1a, 1b and 1c and that will tell you how close they came. The Whynter’s price, by the way, is comparable to that of the Haier.

The 12,000 BTU unit and its 188 cfm airflow are sufficient to cool a 400-square foot room, there is the dehumidification mode we’d expect in a top-rated portable A/C unit, but instead of “auto-evaporate” the Whynter uses its own proprietary technology to “auto drain” and reuse the moisture that’s taken from the air during operation.

The Eco-Friendly model has a digital control panel with remote control, and the same conveniences that we’ve already discussed like the three-speed fan, programmable timer, and auto-restart.

Incidentally, the “Eco-Friendly” tag is placed on this unit by the manufacturer because it uses R-410 refrigerant and is RoHS compliant – but the Honeywell and Haier could boast the same, they just don’t put in their product name.

We couldn’t put together a list of the top 5 best portable air conditioners without a lower-priced option for those with smaller rooms, and we’ve chosen this 8,000 BTU LG model to fill that role. (LG does make more powerful units as well).

It’s rated for rooms up to 200 square feet, which would be a good-sized bedroom, although it’s at its best in rooms a bit smaller.

The LP0814WNR has most of the features you’d expect on bigger models, including auto-evaporation, a remote control, a programmable timer and auto-restart, although it only has two fan settings and does not have a separate dehumidification mode.

The washable filter is easy to remove, and at 55 dBA it’s one of the quietest portable A/C machines we’ve included in our rankings. It’s lighter and easier to move around, too, although you’d naturally expect that in a machine with less power. 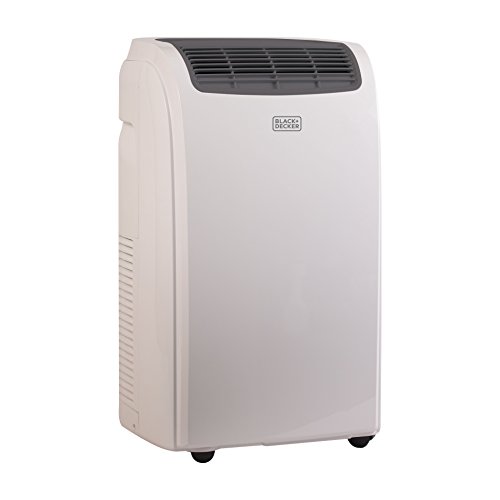 OK, OK, you’ve convinced us. We’ll add one more extremely reasonably-priced portable model to our rankings, and it’s from another manufacturer with a long track record of producing great appliances. This Black+Decker style is available in five sizes, from 8000 BTU up to 14,000 BTU (you can buy the 12,000 BTU unit with or without a bonus heater). We’ve focused on the smallest option because of its attractive price.

The 8000 BTU B+D air conditioner is rated for rooms between 100 and 150 square feet, and is designed to work with either sliding or double-hung windows. There are cooling, fan and dehumidification modes; while most condensation is released as a mist through the exhaust hose, there’s also a bucket inside the unit (that’s emptied via a drain hose when full) for any excess water that may build up when it’s really humid. You can set the thermostat to maintain a steady temperature from 64-90°.

This is a programmable unit that comes with LED digital display and a remote control, there’s a 24-hour timer with sleep mode, and the slide-out filter washes out quickly and easily under the faucet. It’s not silent, but it runs fairly quietly.

* Unfortunately it looks like this Friedrich model might not be available right now, so please consider another portable air conditioning unit from our top 5 list kit for now.

If you live in a hot and humid climate and can’t live without powerful air conditioning, this Friedrich model may be what you’re looking for. It’s expensive and at 9,300 BTU it isn’t built to handle very large spaces.

There are other Friedrich portable air conditioners ranging up to 13,500 BTU for that. But the compensating factor is that there is a “closed loop” cooling system (like the one on traditional air conditioners) with dual exhaust hoses on this ZoneAire; that evacuates hot air 40% faster, cools a room down nearly twice as fast, removes more moisture from the air, and maintains your desired temperature very effectively.

You’ll notice we said effectively, not efficiently; the P09B will use more electricity than most of the other portable A/C units on our list. It’s also the largest and heaviest of all the models we’ve reviewed, so even though it moves pretty well on its caster wheels it’s best suited to be used primarily in just one or two rooms.

If all this talk of BTU’s and dehumidification is getting a little much, why not treat yourself to a nice cool ice cream.  One that you made yourself, of course, after reading the teams review of the Top 5 Best Ice Cream Makers.

Scroll back to top
1shares
wpDiscuz