There may be no subject that’s discussed more among any group of women (other than perhaps their children) than the best creams for cellulite. After all, is any female really happy with the look of her thighs, rear and hips?

This never-ending focus on cellulite is understandable; experts say that between 90 and 95 percent of all women have the telltale lumpy skin that’s often derisively labeled “cottage cheese thighs.” (Men, who have different types of fibers connecting their skin to their muscles, are largely immune from cellulite problems.) Even most skinny women who stay in shape have at least some cellulite, and yes, the majority of supermodels have it too – you usually just don’t see their bumps and dimples once they’ve been photoshopped out of pictures.

It’s easy for men to say, “Everyone has it, what’s the big deal?” But that’s easier said than done, especially for guys who don’t have to see it on their own body, day after day. Besides, we all know that the men saying it would really rather look at women with smooth, sexy legs and tight butts.

Some people undergo laser surgery or liposuction to get rid of their cellulite, and it’s not a bad approach if you have the $10,000 or more the procedure costs. For most of us, though, the best alternative is a lot less expensive. The right cream can greatly reduce the appearance of cellulite on your thighs, legs and rear, giving them the attractive, smooth look they should have.

Here are the top 5 best creams for cellulite on the market. 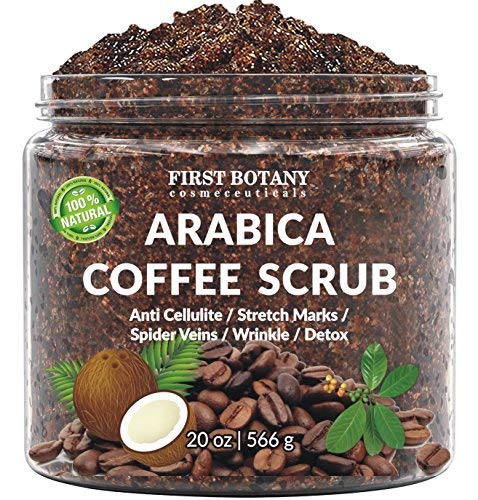 Perhaps the most effective substance used in topical creams to fight cellulite is caffeine. And there’s no better source of caffeine than 100% organic Arabica coffee from Kona, the primary ingredient in First Botany’s all-natural anti-cellulite scrub.

Caffeine is a diuretic that easily penetrates the skin to get rid of excess moisture and increase blood flow, greatly reducing the appearance of skin dimples. And caffeine is also what’s known as a phosphodiesterase inhibitor; what that means is it interferes with a body enzyme that protects fat. In effect, the caffeine lets the body actually burn much of the fat that causes cellulite.

Caffeine derived from organic Arabica coffee works in combination with two other exfoliating ingredients in this product, organic coconut oil and dead sea salt, to make the First Botany scrub a potent weapon against the appearance of cellulite throughout the body. These ingredients also help to fight swelling, and to minimize the appearance of varicose veins and dark circles under the eyes.

There’s much more in the scrub, too. Shea butter, coconut extract, olive oil, sweet almond oil and grapeseed oil boost the skin’s antioxidants, which fight the effects of aging like fine lines and wrinkles, spider veins and stretch marks. All ingredients in the scrub are all-natural, making it a healthy and effective method to exfoliate, rejuvenate and care for your skin.

Not all effective cellulite creams contain caffeine. For example, this Nu Skin product doesn’t, but that’s because it uses a methlxanthine that’s very similar to caffeine. Ilex Paraguariensis leaf extract does almost the same thing as caffeine: ridding the body of extra moisture and boosting blood flow. It also helps the body break down fats, leading to tighter skin.

The rest of the ingredients in this lotion are combined in what Nu Skin calls its “ageLOC” formula; they include hibiscus extract and malvaceae extract to fight fat production and breakdown existing fat, and honey extract which exfoliates the skin.

The Dermatics Effects lotion makes skin feel silkier and softer quickly, and within a few weeks the telltale lumps of cellulite start to fade dramatically. There is a fragrance added to the product which smells like citrus; as with Bodishape, it vanishes fairly quickly and leaves the skin feeling refreshed. 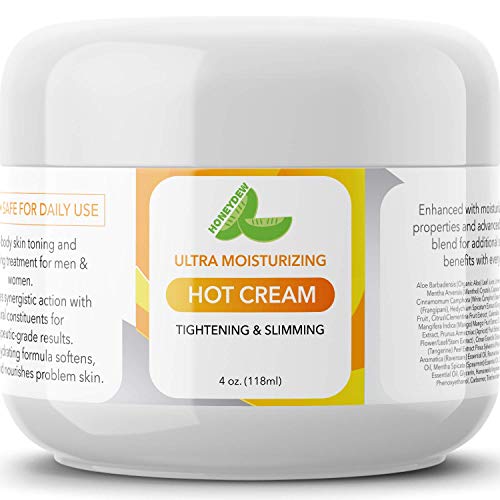 This is a very different type of anti-cellulite cream, manufactured from an enormous selection of all-natural ingredients and no caffeine (or caffeine substitutes). Even more unusual, this product functions as a “heated cream,” massaged into the desired area and then covered by a sweat band, waist trainer or plastic wrap to let the substance get warm and do its work.

The Maple Holistics cream uses ginger lily to stimulate the blood flow that lessens the “rippling” effect of cellulite. It also contains a number of fruit extracts that contribute vitamins and antioxidants, which reduce inflammation and lessen cellulite’s production and appearance.

There’s much more in this cream, too: meadowfoam seed oil and aloe are among the ingredients which soften and smooth the skin; citrus fruits promote elasticity and the development of collagen; calendula lessens fine lines and wrinkles; and apple, mango and orange are some of the extracts that work to firm the skin. Menthol and camphor contribute the “heat” which lets the cream work to best effectiveness, while also relaxing muscles and massaging tissues.

Don’t be put off by the name, which might be insulting to some. This is a no-nonsense cellulite-fighting product at a very nice price. It only has one major active ingredient, but that ingredient is caffeine. As we’ve already mentioned, that’s one of the most important substances any cellulite cream can use to reduce the appearance of fat bumps on the thighs, rear end and legs because it helps eliminate excess moisture while boosting blood flow.

Bliss uses “encapsulated caffeine” for this cream. We’ve normally only seen that process used in products taken orally; the purpose being is to mask the substance’s bitter taste.

However, it apparently is used in this cream in order to control the release of caffeine over time, and since we’re not scientists we don’t know if that’s an approach that makes sense.

Skinceuticals focuses on the effects of tripeptides, hydrolyzed rice protein and yeast extract to do its pricey anti-cellulite work, and does a good job. Groom+Style only ranked it at the bottom of our top five cellulite creams because of its price.

The tripeptides are primarily included to plump up skin and add support to its underlying structure; the rice proteins tighten and firm skin over the long term, while yeast extract is said to “reinflate” the skin to its natural, non-bumpy texture.

This concentrate, which is clean on application without a strong odor, seems to have an effect instantly due to the tingles you feel once it’s on the skin. You don’t see cellulite vanish right away, of course, but the skin is quickly softer. Once you give it a few weeks to work the Skinceuticals product does greatly lessen the appearance of cellulite – some remains, but it’s not overly visible. And isn’t that the purpose of these creams?

* Unfortunately it looks like the Bodishape Slimming Product might not be available right now, so please consider another cellulite removal cream for now.

Two of the most effective substances used to fight cellulite in topical creams are caffeine and glaucine. Bodishape contains both, plus several other active ingredients.

The first important ingredient in this product is glaucine, a plant-based substance commonly used as an anti-inflammatory and muscle relaxant. Here’s why that’s important. Cellulite’s telltale fat bumps are caused when skin is pulled down by the fibers attached to leg and thigh muscles. But glaucine penetrates the skin to relax those muscles, so the skin tension responsible for cellulite’s visible lumps is eased and the skin looks smoother.

The other important ingredient in Bodishape is caffeine, which serves two purposes in our best cream for cellulite. It’s a diuretic that easily penetrates the skin to get rid of excess moisture and increase blood flow, greatly reducing the appearance of skin dimples. And caffeine is also what’s known as a phosphodiesterase inhibitor; what that means is it interferes with a body enzyme that protects fat. In effect, the caffeine “lets” the body actually burn much of the fat that causes cellulite.

Glaucine and caffeine is a potent combination, and Bodishape adds retinol (which stimulates the growth of collagen to normalize the process of generating new skin) and methyl nicotinate (which stimulates blood flow and adds a nice glow to the skin) to the mix, with more caffeine and retinol in their cream than just about all other competitors.

* Unfortunately it looks like the Adonia might not be available right now, so please consider another cellulite removal cream for now.

This product takes a different approach than the usual caffeine treatment for cellulite. It instead relies on organic Greek botanicals (which is how Adonia builds most of its skin care line) and adds plant stem cells to the formulation. Adonia claims the stem cells, which it takes pains to stress aren’t from humans, softens the look of lines and wrinkles because they routinely help regenerate new plants in nature. We’re not sure about the science there, but the Groom+Style review team assume that there’s a good reason for using them.

What is proven to help is the combination of botanical oils from lemon peel, carrot seed, rosemary, cypress, ginger, grapefruit and other plants. They’ve been used to moisturize and soften skin since the days of Hypocrites, and have been shown in testing to still be effective today. We think the company’s claim that the product “reduces the appearance of cellulite by up to 47% in nine minutes” is hyperbole, but we can’t question the fact that Adonia’s LegTone does effectively reduce the appearance of cellulite over weeks.

where do i buy these products in south africa

Thanks very much for the question. I would check with your local pharmacy or department store. Sorry, we cannot be more specific but our team is U.S and European based.

My stretch marks are less noticeable as well. I have been using this product once a day so it doesn’t take much to have great results.

DermalMD Cellulite Cream is amazing!! It has done wonders for my skin. Not only has it reduced cellulite and helped firm my skin, it has also reduced the appearance of scars that I have from surgery. My stretch marks are less noticeable as well. I have been using this product once a day so it doesn’t take much to have great results.

The Art of Skin Care

Scroll back to top
30shares
wpDiscuz