There are two types of people who own blow dryers: the ones who meticulously style and blow out their hair, and the ones who just want to dry off after a shower and get on with their day.

The former put a lot more thought and effort into selecting the dryer which best matches their hair and the look they want; the latter are most likely to grab an inexpensive hair dryer at a department or drug store.

In Groom+Style’s review of the top 5 best hair dryers, we have included more elaborate models which will satisfy even the most dedicated home stylist, as well as choices for those who want an affordable hair dryer that will do a good job in the shortest time possible.

How to Choose the Best Hair Dryer?

It is amazing how complicated a simple hair dryer can be.

There are ionic dryers with ceramic or tourmaline components which produce negative ions. These blow dryers are said to be effective in repairing brittle or dry hair by neutralizing the natural positive charges in damaged follicles and shafts, and smoothing hair by locking in moisture.

In addition, there are titanium dryers which do much the same thing but more efficiently and with more heat.

Some models are designed specifically for hair that is frizzy, curly, treated, coarse or fine, and can include a “cool shot” button and variable heat settings.

In search of some quick assistance to select the blow dryer right for you?

If you have coarse or thick hair, you should consider blow dryers with high heat output.

Alternatively, if your hair is fragile or thin, you are better off choosing lower-powered models.

Most professionals recommend ionic dryers for all hair types, due to their speed and ability to smooth and hydrate hair.

If your hair is prone to damage, an ionic dryer would be the most suitable dryer to purchase if you are the type who prefers to “dry and dash,” a hair dryer with high air flow which can dramatically speed the job while minimizing damage to the hair by lengthy exposure to heat, would be suitable.

When you want your hair to look like you just visited a stylist, you need the type of tool a stylist would use. Unfortunately, that is going to be expensive!  The Velecta Paramount X:Q is the most expensive hair dryer on our list. You should, therefore, expect to get a blow dryer with all the bells and whistles, which is exactly what this unit has!

The French-made X:Q is a deluxe salon model, delivering 2000 watts of power. It uses ceramic and tourmaline components for even, continuous ionic heat generation and distribution. The Velecta Paramount is a very powerful blow dryer, which is designed to deliver heat quickly and efficiently to minimize damage and leave you with hair that is smooth and sleek. Those are claims that companies that produce low-end hairdryers sold in drugstores cannot make, which is why the Velecta is more of a salon tool than a simple blow dryer.

The combination of ceramic and tourmaline is optimal for both styling speed and appearance. Here is how it works: the tourmaline is crushed and melded with ceramic heating elements. This combination emits a much greater level of negative ions than you would get with either one individually. The end result is shinier, smoother and silkier hair that dries in a flash with less frizz and fewer broken or damaged hairs. The Velecta Paramount is ergonomically designed and feels comfortable in the hand.

The controls are simple to use with two speeds, two heat settings (the lower one is perfect for thinner hair) and a cool shot button. Groom+Style also liked the salon-length nine-foot power cord.  2000 watts is a lot of power in a blow dryer, particularly when delivered at 81 mph.

Velecta says it will dry your hair 60% faster than a normal blow dryer. While Groom+Style cannot verify this, we believe it! Just be careful not to over dry your hair, as it can happen very quickly with this model. Velecta Paramount claim the dryer emits only 64 dB of noise, however when you plug it in, it appears to be as loud as any other hair dryer.

The Elchim comes to us from Italy, and while it does not have the sleek look of the Velecta Paramount, its performance comes close to that of our top-ranked model and is better value.

This blow dryer uses ceramic elements to generate the negative ions which neutralize the damaging positive ions created by chemicals and other hair treatments. The ceramic elements close the follicles and smooth down the shafts while hydrating hair, making it smoother, more manageable while reducing frizz and fly-aways.

This is another 2000 watt blow dryer with strong airflow which works extremely quickly even on thick hair, while the two speeds, three heat settings, and cold shot button, let you tone things down for normal or thin hair.

The Elchim works almost as quickly as the Velecta and produces almost the same styling results. The slight difference between the two models may be due to the Elechim not having tourmaline in its ionic mix.

This model looks clunky, but its ergonomic handle fits well in the hand and the eight-foot power cord is sufficient for most uses. One nice feature of the Elchim 3900 is that it comes with two concentrator nozzles (but no diffuser) to let you focus the airflow exactly where you want it.

This is the heaviest ionic dryer the team has reviewed, which is one reason why it comes in at number 3 on our list. You may not mind the extra weight, however, when you learn that the BaByliss performs very well at a price you would expect to pay for a drugstore hairdryer.

Rather than using ceramic and/or tourmaline components, this 2000 watt dryer uses titanium for the creation of negative ions. Titanium provides faster heat transfer than the other two materials, but it is not as evenly delivered. This means you have to be extremely careful not to over dry or even touch the blow dryer to your hair when using it. The uneven and high heat makes this type of model best for blowouts a few times a week rather than for everyday use.

In spite of this, the BaBylissPRO is an inexpensive model and does an impressive job in half the time it would take an ordinary dryer. In addition, the negative ions from the titanium components leave hair even shinier than most ceramic blow dryers. The BaBylissPro is versatile, with two speeds, four heat settings, and a cool shot button. The airflow is very good, and it comes with one concentrator nozzle and a long nine-foot cord. 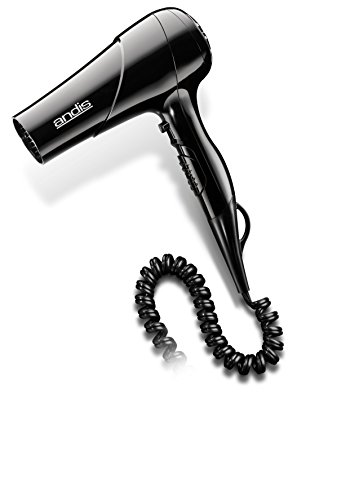 Groom+Style promised you an inexpensive blow dryer which would do the job as quickly as possible at a low price, and here it is! This is an upgraded model over the company’s previous 1875 watt dryer, and Andis has added a number of features at the same great price; the most important is ionic tourmaline technology to help repair damaged hair and lock in the moisture that will keep it healthy.

This upgraded model now has two heat settings as well as two speeds, plus a cool shot button to lock in the style you craft. It has a removable air intake filter that can be cleaned easier, and the coiled power cord has been lengthened to eight feet. Although the design is nothing special to the eye, it is powerful enough to dry long or thick hair almost as quickly as the models the Groom+Style review team has ranked higher on our list.

Groom+Style finish our list with another ionic blow dryer which takes a slightly different approach than the top three products in our rankings. The 1800-watt T3 uses a trademarked technology called “SoftAire”, which uses a specially engineered fan to blow the hot air at a slower speed than normally seen with a more powerful hairdryer.  The producers of this model claim that this is the best way to combat frizzy hair. The air that is delivered is still hot enough to dry hair quickly, and the tourmaline heating elements produce negative ions to keep hair shiny and frizz-free!

The T3 does not come with a diffuser. However, the unit is designed so the hot air comes out gently in a wide cone rather than a tightly-directed blast, effectively acting like a diffuser. This design speeds up the drying process while protecting against the damage that can easily be caused by powerful blow dryers. It does come with a concentrator attachment if you prefer to go that route. There are two speed and three power settings on the T3, with a nine-foot power cord. This model is one of the most stylish dryers Groom+Style have reviewed; it is comfortable to hold and is extremely lightweight.

* Unfortunately it looks like this Andis model might not be available right now, so please consider the Andis 1875-Watt 2-Speed Styling Hair Dryer.

Do not expect ionic technology or lots of options; the Andis Turbo Dryer is for people who hop out of the shower, and just want their hair to be completely dry before going. With 1875 watts of power, the Andis is up to that task.

This model only has one heat setting and two speeds, although it does have a cool shot button. It comes with a concentrator attachment, a hair pick, and a shorter (six feet) power cord. Although the design is nothing special to the eye, it is powerful enough to dry long or thick hair almost as quickly as the ionic models Groom+Style reviewed.

The team at Groom+Style hope you found this review useful.  If you are still on the lookout for other hair styling products why not continue reading about the top 5 flat iron hair brush straighteners?

Thanks for sharing the info! Think I am gonna get a T3 Featherweight 2 Dryer.

Karmin is my favorite =D

The Art of Hair

Scroll back to top
15shares
wpDiscuz